The small European nation of Luxembourg, known as a financial centre within the eurozone with a particular expertise in fund management and investment structures, is expected to threaten and possibly take over London’s role as European hub for Islamic finance in a post-Brexit world, experts say.
London and Luxembourg before where more complementary than competitive in the financial market, according to Nicolas Mackel head of “Luxembourg for Finance,” the promotional agency for the development of Luxembourg as a financial centre, but the Brexit could change that on many levels, including in the niche segment of Islamic finance.
The big hit the UK is suffering politically and economically by the June 23 “Leave” vote will result in years of uncertainty and the risk of thousands of job cuts or at least relocations to mainland Europe within the finance industry, including Islamic finance, which over the past years has gained a strong foothold in London and served as a gateway for Arab investors to Europe. 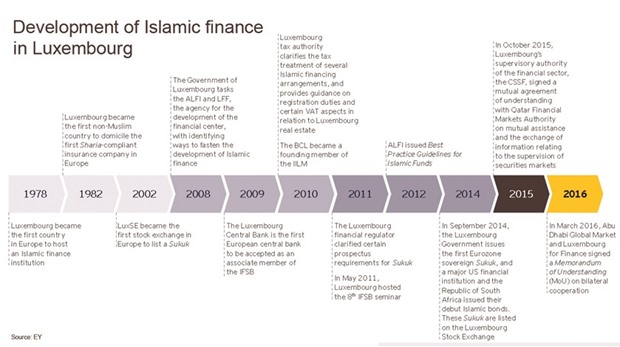 Now that the UK voted to quit the European Union, London’s dominance of the finance industry is severely threatened, the majority of financial analysts say. While the country was attractive to international investors, including from the Arab region, due to its deregulation of financial markets since the 1980s – which helped propel the City of London into one of the world’s major financial centres –, after the Brexit an exodus of those investors is expected as they fear tighter regulations and higher taxes looming, and the prospect of losing easy access to the EU financial market paired with an at least two-year long period of uncertainty over future relations between the UK and other markets.

Looking for alternatives for Islamic investors in Europe, Luxembourg comes quickly to mind. It has shown readiness for innovation over the past years, not only by developing Islamic finance services, but also by inviting financial technology businesses to bring new products and services to the market.
“Luxembourg’s financial centre will continue to improve its competitiveness and establish itself as the destination of choice in the European Union for international investors,” Mackel said, adding that this target is outlined in the LuxFin2020 initiative, a programme that lines out the country’s plans to become the leading financial hub in Europe. The growth plan includes the promotion of technological innovation as well as inviting businesses from emerging financial sectors, including Islamic finance, as well as renminbi operations.

Mackel gets support from a recent study by consultancy EY which found that Luxemburg is already the leading non-Muslim domicile for Shariah-compliant investment funds and third largest globally behind Saudi Arabia and Malaysia. The small nation is a popular location for listing sukuk on the primary market and a preferred location for international investment structures of sovereign wealth funds from the Arab region. The May 2016 report, entitled “Luxembourg: The gateway for Islamic finance and the Middle East” points out the Luxembourg was “perfectly equipped” to address the needs of Shariah-compliant investment funds, including traditional sukuk, no-tax and low-tax alternative investment funds and securitisation vehicles, as well as investment structures, namely financial holding companies. Preferred Shariah-compliant Islamic finance arrangements used in Luxemburg are murabaha, mudaraba, musharaka and ijara.

To underpin the country’s targeted growth in the Islamic finance industry, Luxembourg was also the first European country that joined the International Islamic Liquidity Management Corp (IILM), an institution seeking to create and issue Shariah-compliant financial instruments with co-members such as Kuwait, Qatar, Turkey, UAE, Malaysia and the Islamic Development Bank.

Luxemburg’s central bank is also member of the Islamic Financial Services Board (ISFB), a Kuala Lumpur-based entity that sets international standards in Islamic finance and whose members comprise 190 banks, financial institutions and regulatory bodies with relations to Islamic finance. The Luxembourg Stock Exchange listed its first sukuk in 2002. Since then, issuers from Malaysia, Pakistan, Saudi Arabia, UAE, Bahrain, Qatar, South Africa, US, Hong Kong and Europe listed sukuk in Luxembourg. In September 2014, Luxembourg also issued the first sovereign sukuk in the eurozone and is soon expected to host its first fully-fledged Islamic bank on its territory.